Sarah Vetick is probably too young to remember the phrase “You go, girl,” but it perfectly reflects a recent accomplishment of hers.

Vetick is only 18 years old. And she was just 17 when she earned her private pilot’s license earlier this summer.

“I got it six days before my birthday,” she said.

The West Creek resident believes she is the youngest pilot and the only female pilot to regularly fly out of the Eagles Nest Airport. She’s especially sure of that latter claim.

Vetick did have some advantages over most beginning pilots. Her brother Ricky, 33, served as her instructor. And her parents chipped in with her when she purchased her own plane, a single-prop two-seat Cessna 150, with its original version capable of reaching 124 mph with a range of 350 miles. It is a popular aircraft, the fifth most produced civilian plane ever, with almost 24,000 built.

She had never been in a small aircraft before starting her adventures in the sky to earn her license. 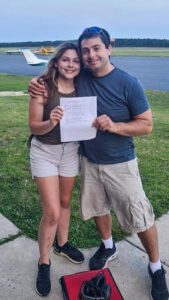 “The smallest plane I had ever been in was a small airliner, like a CRJ,” referring to the Bombardier Canadian Regional Jet, the world’s most popular and fuel efficient 50-seat regional jet.

Flying in a two-seat Cessna, especially when you’re doing the flying, is a totally different experience than traveling in a commercial aircraft. It was a difference that thrilled Vetick.

Was her first solo flight her biggest thrill? Well, she had to think about it because she has already racked up so many thrills in the air.

After all, she has accomplished such things as passing her FAA Private Pilot Check Ride.

“It is an oral exam and a written exam and then a practical exam,” explained one of the newest eagles in the Southern Ocean County skies. “It tests your navigation skills, your safety skills, like what to do if your engine stalls.”

Still, Vetick had to think again when asked what the most difficult part of learning to fly was. Takeoff? Banking? Navigation? The tests? Or probably the first thing most people would think of, landing?

“Landing wasn’t too bad,” she said. “I think it was the intimidation of all of it. Raising my confidence level was my biggest thing.”

Vetick had her first flight training in June 2020. So it took her over a year to earn her license. But remember, COVID-19 and quarantine requirements slowed things down. She had to take about 10 lessons before the first time she soloed. Then, because of the pandemic things, slowed down considerably. Actually, she said, the time out helped as she built her confidence.

A person needs to be 17 years of age and have a minimum of 35 hours of training including at least five hours of solo time in an FAA Part 141 approved school (40 hours of training with at least 10 hours of solo time in a non-approved school) to earn a private pilot certificate, although you can solo at 16 years of age, which is usually done after 10 to 15 hours of training. Many applicants have 70 hours of flight training before they earn a private pilot’s license. A potential pilot must also pass that FAA Private Pilot Check Ride, including the written test, which consists of 60 multiple choice questions.

Another requirement is passing a Class III medical exam with an FAA-approved doctor every five years if you are younger than than 40 years old and every two years once you hit that 40 benchmark. Yet another requirement is speaking English, even if you come from a country where English isn’t the primary language. English is the universal language of the flight world.

A private pilot’s license gives a person the right to fly with passengers, although the pilot may not charge them. Private pilots, though, are permitted to ask passengers to contribute to the cost of a flight, for such things as airplane rental, fuel and landing fees. Those participating in emergencies such as search and rescue operations are allowed to receive compensation for the cost of their flight operation.

Vetick is sure to memorize the rules and restrictions on all sorts of piloting certificates, because a private pilot’s license is only the start for her.

She’s starting college at Mercer County Community College this fall, where she’ll major in aviation management. She eventually hopes to be an air transport pilot.

She also hopes to earn her instructor certificate in two years. Hey, ladies, maybe you should put a sticky note on your fridge right now reminding you to check in with the Eagles Nest Airport in a couple of years if you’re interested in flying and would like a female instructor. After all, Vetick sure would like to see more women joining her in the pilot ranks.

If you’re at the Eagleswood airport and see a young woman walking to or from her plane, you’ve probably met Sarah Vetick – because right now she seems to be one of a kind.

The Sand Paper
Letters
Aviation Assets
Nov 11, 2015
The following is a rebuttal to the letter titled “Aviation Risks” 10/9.

Gov. Chris Christie officially proclaimed May to be General Aviation Appreciation Month. As a general aviation pilot for the last decade, I was happy to learn this little known fact quite by accident. General aviation (GA) can be defined simply as all aviation, except airlines and the military. There are numerous reasons why we should appreciate GA, especially with its contributions to our local communities, and the benefits to the general public that it brings to New Jersey, and our nation as a whole.

Let’s start with a subject that is near and dear to me: animal rescues. A few years ago a good friend asked me to fly with him in his four-seater Cessna 172 to transport a puppy from Eagles Nest Airport to its new home in Virginia. It was a great experience, especially when we saw the smiles on the faces of the new owners when we arrived with their new family member.

Pilots N’ Paws and several other air transport rescue organizations coordinate thousands of flights with volunteer pilots nationwide in an effort to rescue thousands of pets annually. Many of these are from overcrowded kill shelters. Most would be euthanized if no local homes were found, and some are rescued just hours from death. Amazingly, these airlifts are totally free! How is this possible? GA pilots volunteer their time, skills and their planes, and they pay the entire cost of the flights including fuel, maintenance, insurance, meals and lodging.

Tens of thousands of volunteer pilots also provide activities for youth. Young Eagles is a primary example of an educational program that gives children, ages 8 to 17, the opportunity to experience the joy of flight, and it’s free! New Jersey’s Aviation Educational Council pioneered the use of GA as a method to boost children’s interest in overall learning and responsibility.

More recently, several State Aviation Education Councils have been formed to promote aviation education programs for students. Above the Cloud’s mission is to provide inspiration and hope for seriously ill and disadvantaged children through the wonder of flight. Lastly, Challenge Air For Kids And Friends offers inspirational flights for physically challenged children.

Although most take to the skies for the pure fun of it, humanitarian efforts for public health and well-being have been a priority for so many GA pilots. Many volunteer to transport blood supplies, transplant organs and patients in need of medical care, all at no cost to them. Angel Flights is just one of more than 60 groups created by volunteer pilots to provide free transport to those with financial or time-critical medical needs. These pilots assist their communities and others in disaster relief efforts, too.

One recent example took place at my home base, Eagles Nest, a full-service GA airport where they made a concerted effort to assist the National Guard in transporting and distributing food, water, clothing and medical supplies to shelters and victims who were devastated by Superstorm Sandy. Several other GA airports volunteered for this disaster effort as well. One last but important demonstration of general aviation’s selfless achievements is the Veteran’s Airlift Command, which provides free air transportation to combat-wounded soldiers and their families via a national network of volunteer aircraft owners and pilots.

GA helps the local, state and national economy as well. On Feb. 11, eight associations jointly released a study stating general aviation contributes over a million jobs and billions of dollars to the U.S. economy. This and other studies confirm that GA positively affects communities in all 50 U.S. states, and New Jersey is no exception. The state’s GA facilities alone attract $1.5 billion to the state, employing more than 8,000.

Unfortunately, anti-airport advocates continue to push their personal agendas to close more airports. GA has no ad campaigns to help demystify and educate the general public of its many virtues. This letter has merely a sampling of the little-known contributions that airports and pilots have to offer, which enhance the quality of our lives and our communities for the public good.